The exact start of making prosciutto in Karst region is not known. But without a doubt it is a ancient craft, which was passed on from generation to generation in each familiy. And so it holds true also for Ščuka family. Anton Ščuka (1816) told the secrets of drying meat delicacies to his son Mihael (1857) and he passed them on to his sons. The new master of the house became Alojz (1889) and also he trusted all his knowledge to his son Franc (1934). Before Franc, the quantities of dried meat products were very small and the majority was sold to wealthy people of Trieste (now in Italy) in order to make a living and pay taxes.

Franc Ščuka was one of the first men who began drying large quantities of prosciutto for then state-owned company MIP Nova Gorica in the 1960's. He started drying them in the attic of his old house. In the late 1960s the demands for this salty product increased and even overreached the expectations, therefore a new large prosciutto drying facility with a capacity of 10.000 prosciuttos was built in the courtyard. Franc and his wife Pavla also started the first guided tours and tastings in the yard under an ancient umbrella-like mulberry tree. Already in the first years of their operation they started drying prosciuttos of forrest animals (bear, deer, wild boar, moos), which were considered to be extremely rare and great specialty.

Ščuka's prosciutto drying facility was built at a time when there were no modern technologies. In the end of the 1980's the demands for prosciuttos went to the sky, so MIP built in Kobjeglava village 2 new facilities with high tech air conditioning systems. Ščuka family continued drying prosciuttos the only way they knew – the old way. Without unnecessary additives and air conditioners. Salt, wind and time only. The products that came from there were of the highest quality and sold to the most demanding clients. Until the bankruptcy of the MIP company in 2009. 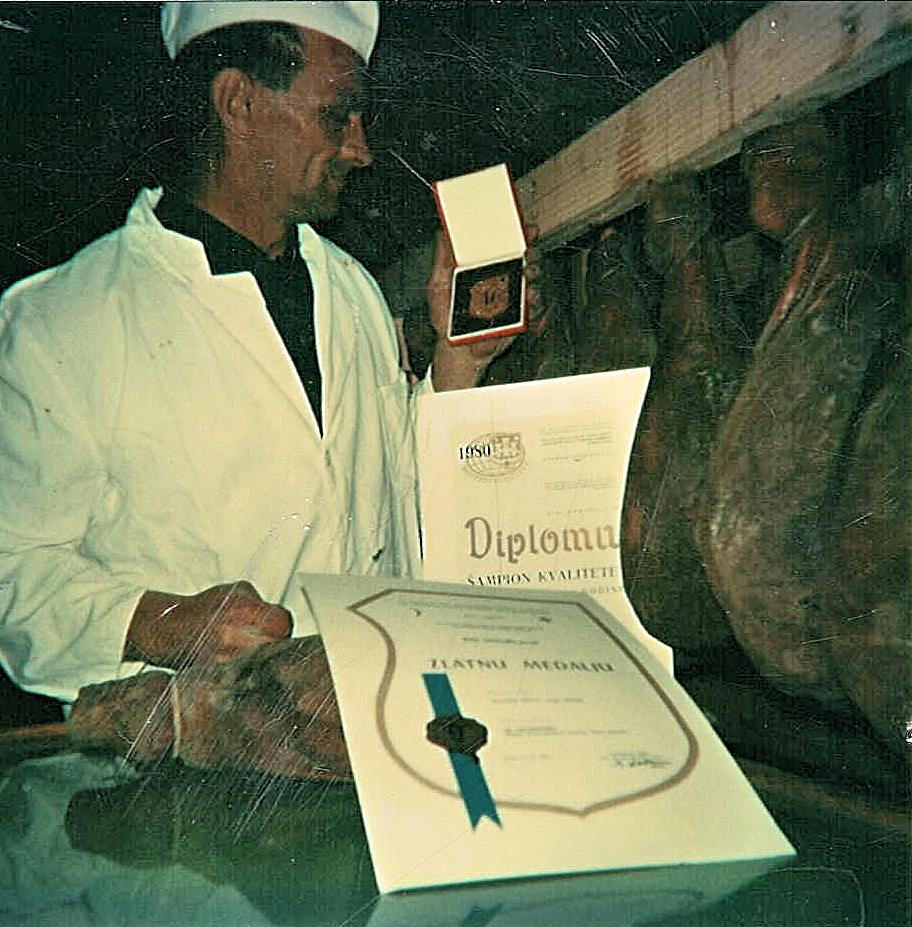 In the archives of MIP Nova Gorica, the family found the record that Franc Ščuka was the first who prepared a comprehensive technological procedure for preparing the Karst prosciutto. The process was made through his own work in his prosciutteria. The Franc's classic technological process represented the basis for the preparation of Karst prosciutto for MIP and over the years, with the introduction of modern technologies, it was only upgraded. Franc was only one of many individuals who contributed to the success story of the company MIP Nova Gorica. During the 1970s and 1980s MIP became a synonym for the quality of meat products in the Yugoslavia and then in Slovenia. Franc made an important contribution to the work of this story, since MIP's hams, which received the most prestigious awards at the competitions, were produced in the Ščuka's prosciutteria.

After MIP's bankruptcy, the family Ščuka sought a successor from other Slovenian prosciutto manufacturers, but found no one that would like to dry prosciutto in the classic way. Times have changed, new technologies have come, which make prosciuttos ready in shorter periods of time. Family own prosciutteria didn't have those technologies and it still does not have them today. Franc's son Milivoj and his wife Katja decided to prove to the modern industry that the quality of the classicaly made prosciutto exceeds the one from fast-paced air-conditioning run industry and that such a product finds buyers on the market to whom quality matters. In 2013 they re-registered the prosciutto drying facility at the Veterinary Administration of the Republic of Slovenia (SI 1084 ES) and started the revival of the classic ham drying. Just like Franc taught them. In 2014 beside prosciutteria they added a tasting area and began promoting the traditional maturation of the prosciuttos through guided tours. Tour and tasting is the same as those prepared by Franc and Pavla Ščuka at the beginning of their journey.

Milivoj and Katja Ščuka with family